Every day the sun sets, this is just another day, another sunset.

As we sit and contemplate the sun sinking into the river, we are struck with awe at the routine magnificence of the sight. It is just another sunset, but this one is ours

Posted by Derek Knight on February 11, 2014
Posted in: An Englishman in America, Life!. Tagged: an Englishman in the USA, cold weather, ice, rain, Snow, UK, weather. Leave a comment

Back in the UK, particularly where I worked in Scotland and then later lived on the East Coast we can get really cold weather, and I know that my friends and family back there are suffering with a lots of winter storms right now. But it feels cold normally because of the wind roaring straight down from the Arctic, or because of really cold rain or sleet blowing in from the North Sea. The UK cold is cold and damp, that can seem to seep into your very soul as you walk along the Quayside in KIng’s Lynn, or fight a north wind along the Royal Mile in Edinburgh.

But in my experience, the actual temperature is not the main issue – it is the cold wind and the rain that cause the main problems. Thinking about this scientifically, I guess that’s because the UK is surrounded by sea water, and that means that when the temperatures fall below freezing, they tend to bounce back fairly quickly.

Not so in the heartland of MidWest America. With nothing to stop the temperatures dropping, they can drop and stay down. We have not been above freezing for the last week, and that is a different kind of cold than I experienced back in England. It snowed about a week ago, and where it’s not been cleared away it is still there. The sun is shining and melting the snow, but it is so cold that the melt water is freezing again as soon as it gets into the shade. My office faces south, and the sun has melted the snow off of this part of the roof, but it has dripped down onto some bushes below, and formed icicles on the branches: 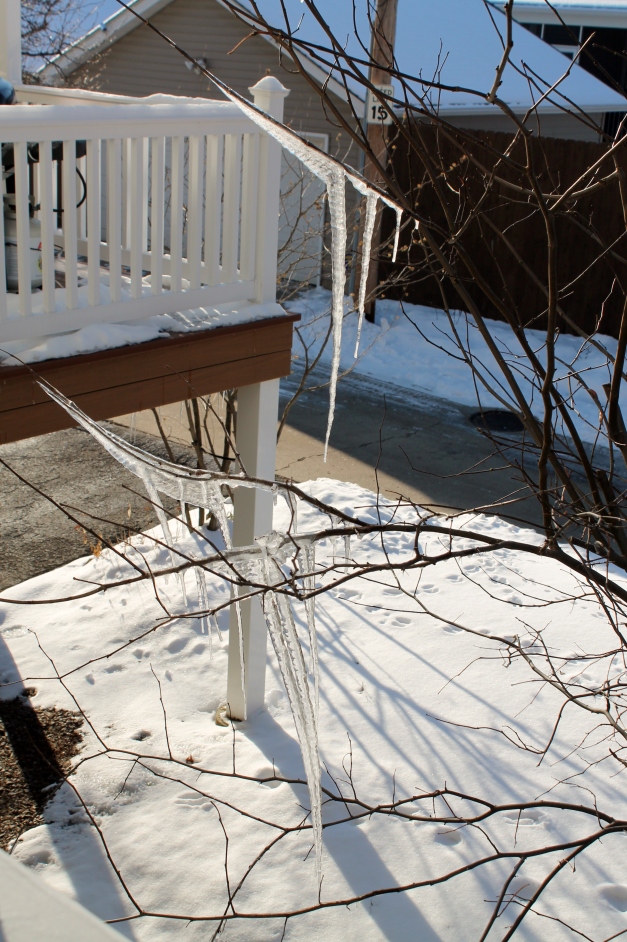 I know that this is an exceptional winter everywhere, and herein Missouri we don’t normally get this extreme winter, but this is not unknown even here, and is perfectly normal for other parts of the continent.

And that is the thing I am coming to grips with – I live on a continent now, not an island. Without the tempering nature of the Sea all around, the temperatures can go up and down an amazing amount. Back in the UK the max and min temps are often only a few degrees apart, but here they can go from sub-zero to balmy in just a day.

And I understand now why Americans think that it always rains in Britain. Here, we will have rain (or snow) in a huge amount – 4 or 5 inches of rain in a couple of hours is not uncommon, and it floods the streets and makes sidewalks impassable. But then there will be nothing for days or week. I am constantly amazed to see the forecast say “0% chance of precipitation”.

Back in the UK it is so much different. There are very few times where a forecaster would confidently predict 0% chance of rain for the whole week ahead, as they do here. But while it does not rain all the time, it does tend to rain often, in smaller amounts than we see over here.

And neither is better or worse – it is just another difference on living on a Big Island.