Fun at the zoo

St Louis boasts one of the nicest zoos in the country, and it’s free to get in! This Wednesday we went there, specifically because they had just opened a new Polar Bear area, with a glass sided pool so you could see the bears on land and in the water.

Even though it was mid-week, it was still busy, with a lot of different summer camp groups around, as well as plenty of families. We got there just in time to miss the first sea-lion show of the day, so went off first to look at the apes, and this guy, who seemed happy enough to just be watching us:

On our way to the Polar bear area, we stopped to watch the pelicans and flamingos. The pelicans were particularly fascinating, as the scooped up water in their bills then threw back their heads to swallow:

Then it was off to see the Polar Bear. To get there, you walk through the penguin area, which is great fun to see these comical looking creatures. Emerging from their cold realm, we found ourselves at the glass wall of the Polar Bear enclosure, but no bear was to be seen. We carried on around to the part of the exhibit where you can see under the water, and then round to the front of the enclosure – but no bear. We were just about to go away disappointed, when seemingly from nowhere, the polar bear appeared and seemed to rush across the compound. The crowd went wild, and ran forward to see him as he jumped into the water. 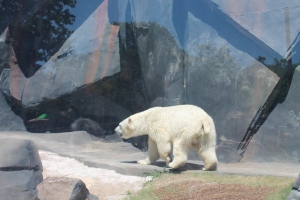 Then it was time for the sea-lion show and home. A great day out, and only a mile away:)

More of my pictures from the zoo can be found here.

This site uses Akismet to reduce spam. Learn how your comment data is processed.